The following objects have been reported stolen. In case one is being offered to you kindly contact the police.

Lost sculptures from the Eshmun Sanctuary near Sidon, Lebanon
With the permission of the Lebanese Directorate General of Antiquities, we have decided to publish photographs of sculptures and reliefs from the Eshmun Sanctuary in Lebanon that disappeared during the Lebanese Civil War (1973-1990) and have remained untraced since then.
Please find all photographs under this link: .CQ 4_2019 EN Eshmun-1
We thank David Cahn for his work on this and for allowing us to publish this on our website.

Psammetik-aoua-Neith, born of Neith-emhat
Faience with incisesed hieroglyphs and the cartouche of Psammetik I or II
Egypt, Saïte –Late Dynastic Period, 26th Dynasty, 664-525 BC
Height: 16,2 cm

Blue faience with a T-shaped inscription giving the name and the titles of the deceased        .
Found in Mendes, Lower Egypt – Late Dynastic Period, 30th Dynasty, ca. 350 BC
Height: 17.1 cm
Stolen during Cultures 2017 from Galerie Eberwein – Göttingen/Paris

Stolen in 2017 from Galerie Eberwein – Göttingen/Paris 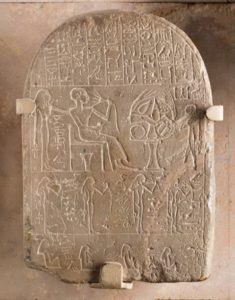