Alexander Ancient Art was established by Egyptologist Alexander Biesbroek. He studied Egyptology at the universities of Utrecht and Leiden (the Netherlands). In 1986 he was offered a (part-time) post at Utrecht University, where he has been doing Egyptological research until 2003, when the whole department was closed, due to a cutback in the university budget.

Alexander has been a collector of ancient art since 1972. In 1986 he also started dealing in antiquities, which led to the establishment of the company in 1991. He has since worked as a consultant for collectors of ancient art worldwide, and has sold objects to many collectors and museums.

A Luristan terracotta bull with a vessel-like hollow body. There is an undulating snake on the back of the animal, its head emerging between the horns. Another snake is peeping from the darkness of the aperture in the chest. The eyes of the bull are composed of applied rings, those of the snakes are inlaid.
Early 1st millennium B.C.; height 39.3 cm, length 30.3 cm. 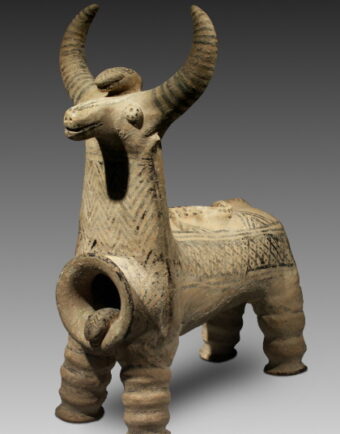